Yahoo released a list of the top ten search requests for 2014 recent days. The Ebola virus was on the top one, and we got that fear and rumors are always spread faster than virus. Apple iPhone 6 with 4.7 inches is the ninth most searched one, which is ahead of Jennifer Aniston.

The game of Minecraft was ranked second, and the third and fourth place was for Ariana Grande and Jennifer Lawrence. The fifth one belong to Kaley Cuoco, and Kim Kardashian got the sixth most requested search of 2014 because of her vertigo-inducing curves. And the Apple iPhone 6 got the ninth place, which is ahead of Jennifer Aniston and following the Miley Cyrus.

In addition, Yahoo also released some terms which is fad but fade out quickly. Just like the Flappy Bird of mobile game, which earned tens of thousands dollars daily in advertising revenue until the developer pulled it. And the Flappy Bird goes to the second place on the Obsession of 2014. 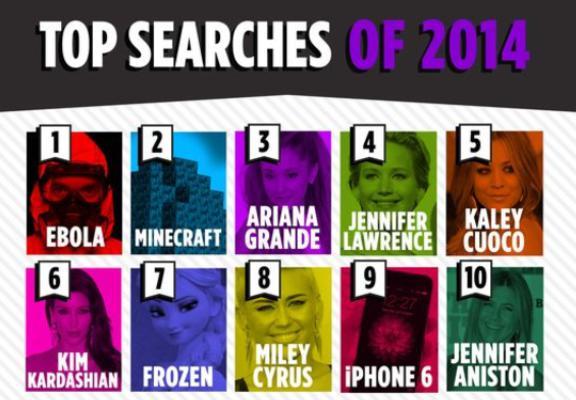 On the top of the Obsession list is ALS Ice Bucket Challenge, even some smart phone including Samsung Galaxy S5 and the HTC One (M8) got into the challenge.

Which one do you want to see on the top search of 2015? Waiting for you right here next year to find out.